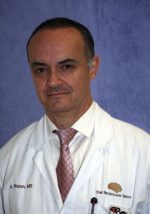 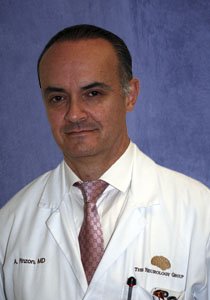 Alberto Pinzon, MD, is a physician who specializes in diagnosing and treating patients with epilepsy. Dr. Pinzon has a deep interest in advancing research in his field. Throughout the years, he has continuously published neuroscience research papers in peer-reviewed journals, and his current research interest involves improving diagnostic techniques for use in general neurology and epilepsy. He currently serves as Director of the Epilepsy Program at the Baptist Hospital Neuroscience Center.

Dr. Pinzon received his medical degree from Rosario University in Bogota, Colombia, which included clerkships at the University of Miami-Jackson Memorial Hospital.

His interest in electrophysiology and biotechnology led him to pursue engineering courses at Boston University and Harvard, where his work involved the development of electrophysiological techniques for assessment and treatment of spinal cord injury paradigms. He went on to complete his master’s and Ph.D. degrees in biomedical engineering at the University of Miami.

After moving to New York City, Dr. Pinzon completed his internship at Jacobi Medical Center and his residency at the Albert Einstein College of Medicine Montefiore Medical Center. He returned to Miami to complete a fellowship in clinical neurophysiology-epilepsy at Miami Children’s Hospital.

Board Certifications
Diplomate of the American Board of Psychiatry and Neurology


Alberto Pinzon, MD is a neurologist with specialties in Neurophysiology and Epilepsy. His office is located in Miami, Florida. Contact Dr. Pinzon at (305) 596-2080.