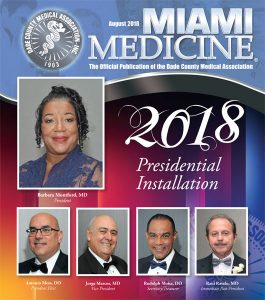 About Antonio Mesa, DO

Antonio Mesa, DO is a board-certified neurologist in Miami, Florida. Dr. Meso is subspecialty board certified in pain medicine. He specializes in interventional pain management. As part of his clinical practice, Dr. Mesa also runs the pelvic pain service and the pediatric pain service.

Dr. Mesa has a dual appointment as an Assistant Professor of Neurology and Anesthesiology at the University of Miami Miller School of Medicine. He is the Medical Director of the Jackson Memorial Hospital Pain Clinic. Dr. Mesa was also appointed to the Board of Directors as President-Elect of the Dade County Medical Association.

Jorge Marcos, MD is a neurologist with over 25 years of clinical experience in the Miami, Florida region. Dr. Marcos has conducted numerous lectures and seminars to increase awareness of Alzheimer’s disease screening, diagnosis, and treatment in the Hispanic community. He specializes in Parkinson’s disease, tremors, and other movement disorders.

He is a member of the Academy of Neurology, the Parkinson’s and Movement Disorder Society, American Epilepsy Society, Florida Medical Association and Vice-President of the Dade County Medical Association. In addition, he was the recipient of the John H. Jackson Fellowship of the American Epilepsy Foundation for his research on “Seizure Prevention on Stroke”.  Dr. Marcos also served on the advisory board of the Local American Heart Association and South Florida Epilepsy Foundation.