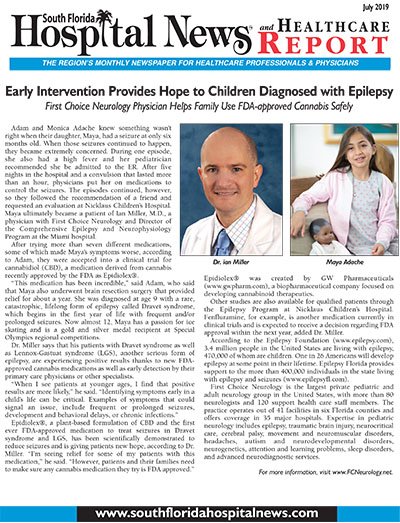 Adam and Monica Adache knew something wasn’t right when their daughter, Maya, had a seizure at only six months old. When those seizures continued to happen, they became extremely concerned. During one episode, she also had a high fever and her pediatrician recommended she be admitted to the ER. After five nights in the hospital and a convulsion that lasted more than an hour, physicians put her on medications to control the seizures. The episodes continued, however, so they followed the recommendation of a friend and requested an evaluation at Nicklaus Children’s Hospital. Maya ultimately became a patient of Ian Miller, M.D., a physician with First Choice Neurology and Director of the Comprehensive Epilepsy and Neurophysiology Program at the Miami hospital.

After trying more than seven different medications, some of which made Maya’s symptoms worse, according to Adam, they were accepted into a clinical trial for cannabidiol (CBD), a medication derived from cannabis recently approved by the FDA as Epidiolex®.

“This medication has been incredible,” said Adam, who said that Maya also underwent brain resection surgery that provided relief for about a year. She was diagnosed at age 9 with a rare, catastrophic, lifelong form of epilepsy called Dravet syndrome, which begins in the first year of life with frequent and/or prolonged seizures. Now almost 12, Maya has a passion for ice skating and is a gold and silver medal recipient at Special Olympics regional competitions. Dr. Ian Miller says that his patients with Dravet syndrome as well as Lennox Gastuat syndrome (LGS), another serious form of epilepsy, are experiencing positive results thanks to new FDA approved cannabis medications as well as early detection by their primary care physicians or other specialists.

“When I see patients at younger ages, I find that positive results are more likely,” he said. “Identifying symptoms early in a child’s life can be critical. Examples of symptoms that could signal an issue include frequent or prolonged seizures, development, and behavioral delays, or chronic infections.”

Epidiolex®, a plant-based formulation of CBD and the first-ever FDA-approved medication to treat seizures in Dravet syndrome and LGS, has been scientifically demonstrated to reduce seizures and is giving patients new hope, according to Dr. Ian Miller.

“I’m seeing relief for some of my patients with this medication,” he said. “However, patients and their families need to make sure any cannabis medication they try is FDA approved.” Epidiolex® was created by GW Pharmaceuticals (gwpharm.com), a biopharmaceutical company focused on developing cannabinoid therapeutics.

Other studies are also available for qualified patients through the Epilepsy Program at Nicklaus Children’s Hospital. Fenfluramine, for example, is another medication currently in clinical trials and is expected to receive a decision regarding FDA approval within the next year, added Dr. Miller.