Brain & Life Magazine is a free publication and website for patients and caregivers from the American Academy of Neurology. It covers a range of topics including multiple sclerosis, Alzheimer’s disease, dementia, epilepsy, concussion, Parkinson’s disease, movement disorders, neuropathy, sleep disorders, migraines, and much, much more. 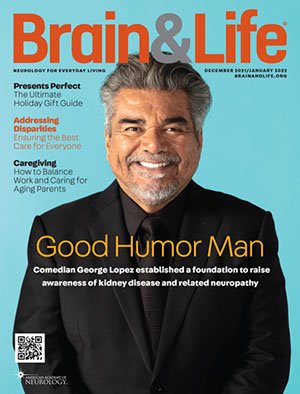 Understanding the Different Types of Neuropathy
Comedian George Lopez was born with a genetic condition that causes kidney disease. In the years before he had a transplant in 2005, Lopez likely experienced uremic neuropathy—a painful neurologic complication of chronic kidney disease. Neuropathy, which involves degeneration of nerves, can cause numbness, prickling, a burning sensation, stabbing pain, or even electric shocks of pain.
Read the full article

Can a Vitamin Deficiency Cause Neurologic Problems?
Vitamin and mineral deficiencies can lead to a wide range of neurologic problems. They also can occur because of certain diseases, such as cystic fibrosis, that affect the absorption of vitamins and minerals. A deficiency of vitamin B12 can cause cognitive impairment and myeloneuropathy—damage to the spinal cord and peripheral nerves in the legs—resulting in difficulty walking, weakness, numbness, and poor coordination. Doctors recommend checking B12 levels, especially for anyone being evaluated for dementia or neuropathy.
Read the full article 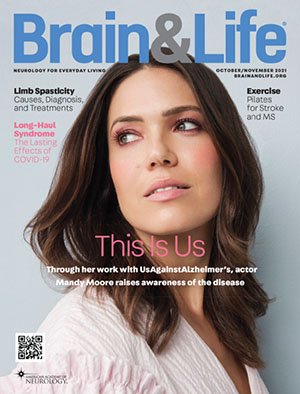 Mandy Moore Raises Awareness of Alzheimer’s Disease
She plays a character with dementia on the TV show This Is Us. After filming her last scene for the 2019 Thanksgiving episode of This Is Us, Mandy Moore rushed back to her trailer, shut the door, and burst into tears. “I had all this emotion pent up that I was holding back, and I had to let it go,” she recalls. She is now joining the fight against Alzheimer's.
Read the full article

The Power of Pilates for People with Stroke and Multiple Sclerosis (MS)
Many people who've had a stroke can benefit from regular exercise. It increases cardiovascular fitness and muscle strength, which can improve function. Neurologists agree and recommend it for a wide range of neurologic conditions.
Read the full article 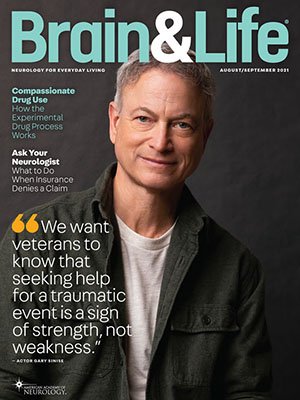 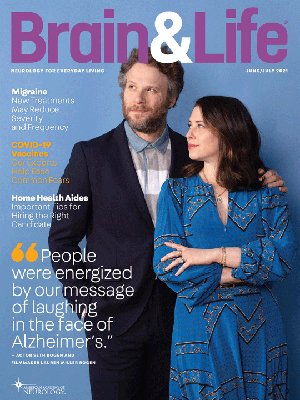 Five Habits to Possibly Lower the Risk for Alzheimer's Disease
A new review published pinpointed several significant risk factors—and offered a list of habits people can adopt to possibly lower their risk for the disease. Most of these recommendations revolve around five key areas: exercise, nutrition, mental fitness, sleep, and emotional well-being.
Read the full article

Underlying Neurologic Conditions and the COVID-19 Vaccine
Many people with neurologic disorders are concerned that the COVID-19 vaccine may exacerbate their symptoms or produce debilitating side effects. In general, neurologists assure their patients that the vaccines are as safe for them as for anyone else. In fact, the vaccine is more beneficial to them, because having a neurologic disorder could raise people's risk of getting severely ill, or having their disorders worsen if they contract COVID-19.
Read the full article 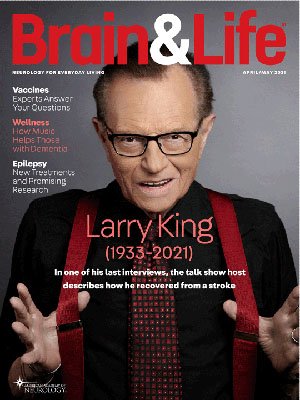 Larry King's Resilience After Stroke
In many ways, King's longevity was a miracle. He had a heart attack and bypass surgery in his early fifties was diagnosed with diabetes and lung cancer in 2017 and had a massive stroke in 2019 that put him in a coma for days and left him unable to walk on his own.
Read the full article

Promising Epilepsy Research and New Treatments Give Hope to Patients
Valtoco and Nayzilam, two benzodiazepine nasal sprays, have been approved for the acute treatment of seizure clusters; both are considered rescue medications used to stop a seizure quickly and prevent it from escalating to a medical emergency. They can be given during a bout of seizures or used to interrupt a cluster of repeated seizures.
Read the full article

CNN correspondent and neurosurgeon Sanjay Gupta advocates for better brain health
His new book, Keep Sharp, is about optimizing brain health. “Most adults recognize the importance of brain health but have no idea how to achieve it or even if it's possible,” Dr. Gupta says. “I wanted to show how to do it.”
Read the full article

How a Plant-Based Diet May Lower Risk of Parkinson’s Disease
Healthy eating habits such as consuming plenty of vegetables, choosing whole grains over refined carbohydrates, and getting protein from nuts and fish rather than red meat may help stave off symptoms associated with the early stages of Parkinson's disease, at least two studies have shown.
Read the full article 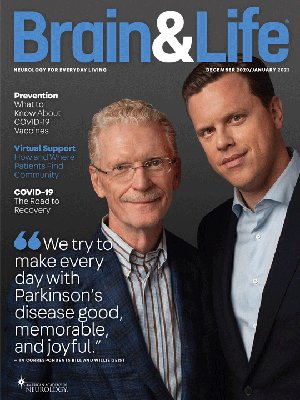 TV Journalists Bill and Willie Geist Spread the Word About Parkinson’s Disease
After he went public with his diagnosis of Parkinson's disease, TV journalist Bill Geist enlisted his son, Willie, to help increase awareness about the progressive movement disorder. The former CBS Sunday Morning correspondent and best-selling author was diagnosed with Parkinson's disease in 1992, he and his wife, Jody Lewis Geist, kept it a secret from their children, Willie and Libby, for more than 10 years.
Read the full article

COVID-19 Vaccines: What You Need to Know
With promising news about vaccines for COVID-19 coming in 2021, learn what’s involved in delivering them safely and effectively. The goal of OWS is to produce and deliver 300 million COVID-19 vaccine doses, with initial doses available by January 2021, according to the US Department of Health and Human Services.
Read the full article 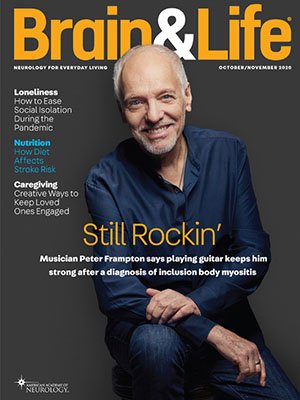 Peter Frampton Found New Purpose After Inclusion Body Myositis (IBM) Diagnosis
Frampton was referred to a neurologist, who instructed the musician during the exam to make a fist and keep it tight. Despite Frampton's efforts, the doctor could easily pry the fingers back from his palm. The doctor also asked Frampton to jump 10 times on each leg. On his right leg, he had no problem; on his left, he could manage only four jumps. After laboratory testing, the neurologist sat Frampton down and told him "You have IBM [inclusion body myositis]." IBM is a progressive neuromuscular disorder, but it's not fatal.
Read the full article

Is There a Link Between COVID-19 and Stroke?
Both research and anecdotal evidence suggest a link between COVID-19 and increased risk of stroke, a phenomenon that emergency department physicians and neurologists began reporting within weeks of the coronavirus outbreak in the United States. Some patients came to the hospital because of a stroke and tested positive for COVID-19, and others had a stroke after being admitted for the virus.
Read the full article 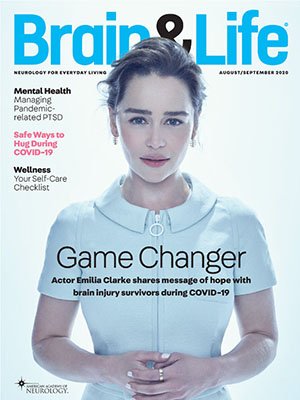 Emilia Clarke, The Game of Thrones Actor Emerged Stronger After Two Brain Aneurysms
Clarke's first aneurysm occurred in February 2011. She experienced a headache so intense she could barely put on her sneakers. What followed was a blur: a siren, an ambulance, jumbled voices, a brain MRI. And then a diagnosis: She'd had a subarachnoid hemorrhage, a type of stroke generally caused when an aneurysm—a balloon-like bulge in an artery—ruptures and spills blood into the space surrounding the brain.
Read the full article

Why Does COVID-19 Affect Men More Severely Than Women?
Researchers try to tease out why fewer women are dying of COVID-19 than men and whether their advantage makes them more vulnerable to autoimmune diseases. Many aspects of the novel coronavirus known as COVID-19 still puzzle scientists and clinicians, especially as the data continue to evolve.
Read the full article 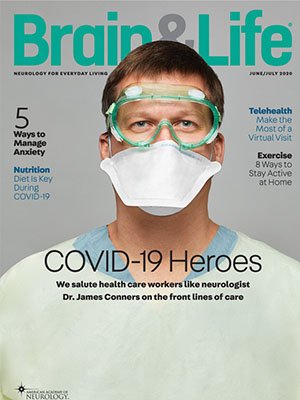 How Does COVID-19 Cause a Loss of Smell and Taste?
Studies are underway to determine how COVID-19 causes a loss of smell. Some people with COVID-19 who have lost their sense of smell and taste have reported a return of function within a few weeks; many others, however, have not noticed such a return.
Read the full article

Dealing with a Chronic Neurologic Condition is often Stressful during COVID-19
It's natural to feel anxious after a stroke or after a diagnosis of a chronic neurologic condition like multiple sclerosis (MS) or Parkinson's disease, where the course can be uncertain and possibly debilitating. But when the whole world is experiencing a collective surge of anxiety about their health and the health of loved ones, it can add an emotional burden.
Read the full article 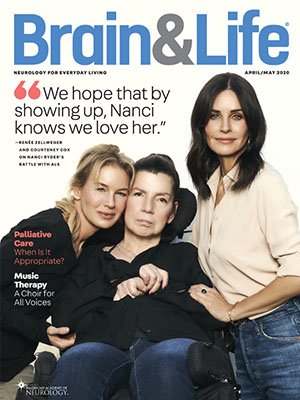 People with Neurologic Conditions may be Especially Vulnerable to COVID-19
The Centers for Disease Control and Prevention (CDC) has identified older adults and people with serious chronic medical conditions, like heart disease, lung disease, and diabetes, as at especially high risk of getting very sick. So too are people with chronic neurologic conditions, such as multiple sclerosis (MS), Parkinson's disease, Alzheimer's disease, ALS, myasthenia gravis, and other disorders.
Read the full article

Foods That May Protect Against Dementia
Older adults who munched, crunched, and sipped the most flavonols—beneficial compounds in the fruit, vegetables, tea, and wine—were 48 percent less likely to develop Alzheimer's disease than people who consumed the least, according to a January 2019 report in Neurology.
Read the full article 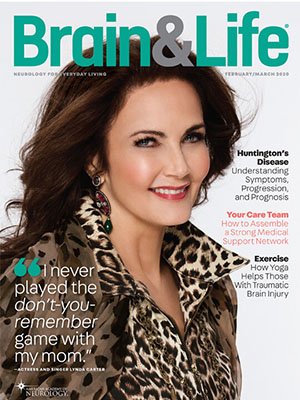 Lynda Carter Advocates for Those with Alzheimer’s Disease
Since her late mother was diagnosed with Alzheimer's disease Carter has played her most important role in advocating for more awareness and research funding for the disease. She recently began lending her name and support to Maria Shriver's Women's Alzheimer's Movement. She also serves on an executive committee for the Alzheimer's Drug Discovery Foundation, a nonprofit organization founded in 1998 by the Lauder family to support Alzheimer's disease research worldwide.
Read the full article

Scientists say we need shut-eye to keep the brain healthy and guard against cognitive decline.
Like many patients with neurologic conditions, Jaffe takes medication that can interfere with sleep. One such drug, ropinirole (Requip)—which is prescribed for restless legs syndrome and causes impulsive behavior in some people—leaves Jaffe feeling revved up and unwilling to put away a project, no matter how late it gets.
Read the full article 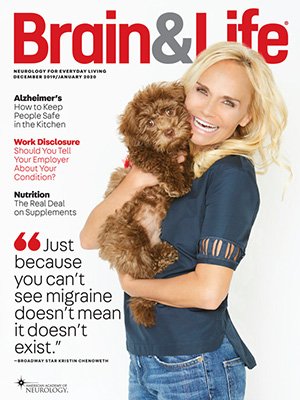 Cooking Could Benefit Patients with Alzheimer's
After a diagnosis of Alzheimer's disease, a renowned cookbook author continues cooking with help from friends. Their tips may be useful for others with dementia.
Read the full article 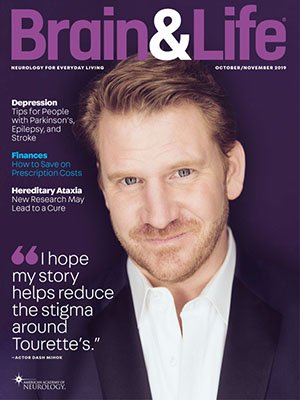 Actor Dash Mihok Explains How Tourette Syndrome Shaped His Career
Tourette syndrome typically is diagnosed in childhood. In the United States, one in 100 people may have milder symptoms and about 200,000 have a severe form of Tourette's, according to the National Institute of Neurological Disorders and Stroke.
Read the full article

Neurologic Conditions Can Lead to Depression
Depression is common with conditions like epilepsy, stroke, and Parkinson's disease. Learn how to identify and deal with this mood disorder.
Read the full article 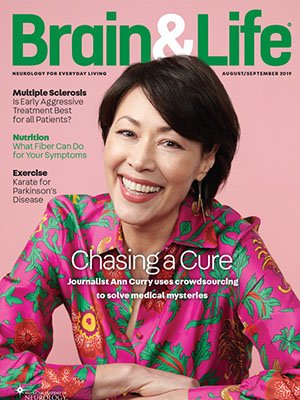 Journalist Ann Curry hopes Crowdsourcing can Solve Medical Mysteries
A live television series that uses crowdsourcing to connect people who have undiagnosed or misdiagnosed medical conditions with experts around the world sounded almost impossible to do in a responsible way.
Read the full article

Why MS patients may Benefit from Aggressive Early Treatment
Research shows that treatment at the first sign of the disease may be best for most patients with multiple sclerosis. Disease severity and symptoms vary from person to person, but MS commonly causes problems with vision, walking, and balance, as well as unusual fatigue, pain, muscle weakness or spasms, numbness and tingling, bladder or bowel dysfunction, and cognitive and emotional changes such as depression and anxiety.
Read the full article 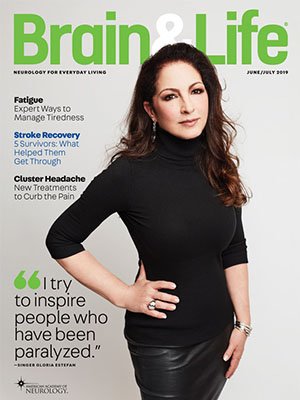 Singer Gloria Estefan talks about Surviving a Severe Spinal Injury
Nearly 30 years after fracturing her back in a bus accident, Gloria Estefan is standing tall. At 61, she's performing to adoring crowds, earning distinguished honors, taking her Broadway show to London's West End, and—perhaps most inspiring—championing new research that enables others who are paralyzed to move and walk again.
Read the full article

Faces of Stroke
Anyone can experience a stroke, regardless of age, sex, or race. Brain and Life magazine interviews five survivors of a stroke. These five survivors attest, recovery is multifaceted too.
Read the full article 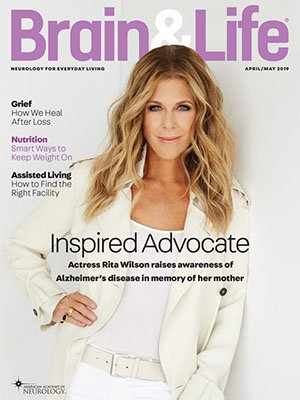 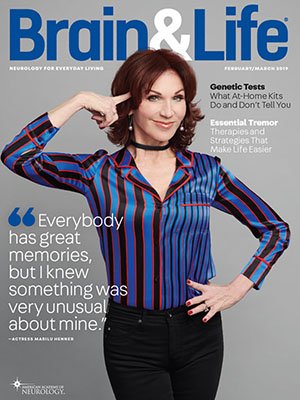 How Improvisational Techniques Help Engage Dementia Patients
In the years after her mother was diagnosed with Alzheimer's disease, Karen Stobbe remembers listening to a Beatles song and hearing her mother tell her she had dated one of the musicians. Stobbe's initial urge was to dispute her mother's claim as impossible.
Read the full story