First Choice Neurology’s Memory Cafe is a virtual community for those living with Alzheimer’s disease and dementia, caregivers, and family members. Our virtual Memory Cafe offers educational materials, videos, support groups, a list of Neurologists, a virtual library, clinical trials, and other resources for Alzheimer’s and dementia. 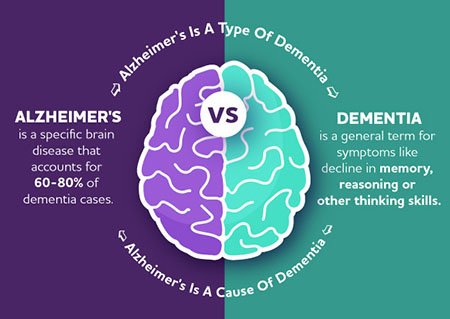 Dementia is a loss of cognitive function associated with a number of neurological conditions such as Alzheimer's disease, Lewy Body Dementia, Huntington's Disease, and Traumatic Brain Injury. People with dementia may have problems with short-term memory, keeping track of everyday items such as their keys or wallet, paying bills, grocery shopping, or cleaning the house. While it is not a normal part of aging, it mainly affects older people.

There are an estimated 50 million people living with dementia worldwide. There are many causes and some are reversible and some are progressive. The earlier it is diagnosed, the more it can improve your quality of life. Some conditions can be very progressive. This means you might not notice symptoms right away because they start out slowly and gradually get worse. It may be hard to notice the difference between old age memory loss, and dementia.

Dementia is not a disease. It is a term that describes symptoms associated with declining memory. It is also a term used when a person's thinking skills are severe enough to reduce the ability to perform everyday activities. Being diagnosed with dementia is often a frightening experience.

What is Alzheimer's Disease (AD)?

Alzheimer’s disease is a degenerative brain disease. Alzheimer’s is a type of dementia that causes problems with memory loss and cognitive abilities. Researchers believe that Alzheimer’s disease begins 20 years or more before you notice symptoms. Symptoms occur because nerve cells (neurons) in parts of the brain have been damaged or destroyed. Symptoms usually develop slowly and worsen over time, interfering with an individuals’ ability to perform everyday activities.

In the early stages, memory loss is mild, and the individual is said to have dementia due to Alzheimer’s disease, or Alzheimer’s dementia. In the late-stage of Alzheimer’s, neurons in parts of the brain that enable a person to carry out basic bodily functions are affected. Individuals lose the ability to carry on a conversation, walk, or swallow. The cause may include a combination of genetic, environmental, and lifestyle factors.

What is Huntington's Disease?

Huntington's disease is a progressive brain disorder caused by a single defective gene on chromosome 4. The defective gene codes the blueprint for a protein called huntingtin. Defective huntingtin protein leads to brain changes that cause abnormal involuntary movements, a severe decline in thinking and reasoning skills, and irritability, depression, and other mood changes.

Huntington's disease brain changes lead to alterations in mood, especially depression, anxiety, and uncharacteristic anger and irritability. Another common symptom is obsessive-compulsive behavior, leading a person to repeat the same question or activity over and over.

Type in either "Alzheimer’s Disease" or "Dementia" under specialties. If you are looking for a Neurologist is a specific location in Florida, type in the city.

Music and Mind LIVE is a weekly webinar series with Renée Fleming, in conversation with scientists and practitioners exploring the powerful impact of music and arts on human health and the brain.

First Choice Neurology has 6 Research Centers who are conducting clinical trials for Alzheimer's. Our research centers are located in Aventura, Boca Raton, Miami, and Tampa, Florida.