Baptist Hospital at Miami has invested in cutting edge technology for the treatment of movement disorders, especially essential tremor which has been approved by Medicare as a treatment option beginning July 12th. The institution already has a reputation for providing the latest advances in treatment, including novel medication delivery systems and deep brain stimulation. More recently, they have installed an MRI High-Intensity Focused Ultrasound suite to provide additional, high-tech, options for our patients. 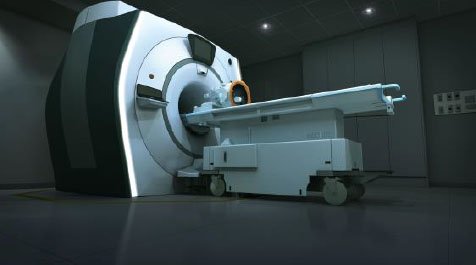 The High-Intensity Focused Ultrasound system focuses up to a thousand small ultrasound waves on a small target deep within the brain, a location known to have abnormal activity in tremor patients. The treatment is non-invasive, and the waves originate outside the head, but where they converge, the high energy causes a disruption of the abnormal cells and subsequently reduces tremor. “Think of a magnifying glass in the sun”, says Dr. Justin Sporrer, Director of Functional Neurosurgery, “the light rays are not enough to cause damage unless they are focused on a single point”.

Dr. Sporrer explains that this treatment combines the advantages of other modalities. For example, deep brain stimulation allows us to test out a specific part of the brain before implantation, but requires an invasive, though low risk, surgery. Radiosurgery is non-invasive, but the target is chosen and treated, which doesn’t allow for modification or reversibility.

This new technology allows us to use lower, reversible, energy to “test out” the target for maximum effect before initiating irreversible high energy treatment. “Think of it like taking a test drive, to make sure we have the perfect location and best effect”, says Dr. Sporrer. Dr. Justin Sporrer and Dr. Bruno V. Gallo are seeing patients now to discuss High-Intensity Focused Ultrasound amongst other options for the treatment of tremor and movement disorders.

In addition to movement disorders, plans are underway to develop clinical protocols for using the High-Intensity Focused Ultrasound system for opening of the blood-brain barrier to chemotherapy for patients with recurrent diffuse infiltrating pontine glioma (DIPG). Drs. Mathew Hall and Michael McDermott will be working with the group from the Toronto Children’s Hospital where pre-clinical model systems have confirmed the feasibility and activity of this treatment. In addition, the hyperthermia created by the High-Intensity Focused Ultrasound system will be explored as an additional treatment to radiation and chemotherapy for patients with deep-seated, inoperable, and recurrent malignant gliomas.

Dr. Justin Sporrer, the Director of Functional Neurosurgery Baptist Hospital at Miami. and Dr. Bruno V. Gallo, Medical Director of Movement Disorders, work collaboratively to bring relief to patients who suffer from Parkinson’s disease, essential tremors, and dystonia. Under their direction, the first essential tremor and dystonia patients were treated with deep brain stimulation (DBS) shortly after resuming elective surgeries in June. Through the careful placement of stimulation leads and skilled devise programming, these patients have experienced a tremendous reduction in disordered movement and significant improvement in the quality of life.

In addition to the expansion of DBS treatment, the functional neuroscience team is expanding their treatment options by bringing a new innovative technology called High-Intensity Focused Ultrasound (HIFU) to the Miami Neuroscience Institute (MNI). High-Intensity Focused Ultrasound is currently FDA approved for the treatment of patients with essential tremors and tremor-dominated Parkinson’s disease. This venture began over a year ago and we are excited to announce our first patient will receive HIFU treatment later this month. This new treatment option will allow our skilled physicians to bring relief to more patients within our community.

Dystonia is a neurological movement disorder, in which sustained muscle contractions cause twisting and repetitive movements or abnormal postures of the hands, arms, legs, or trunk of the body. The exact causes of dystonias are unknown. The disorder may be hereditary (genetic) or caused by other factors such as birth-related or other physical trauma, infection, poisoning (e.g., lead poisoning). It can also be a reaction to certain pharmaceutical drugs, particularly neuroleptics.

It interferes with many activities such as writing or playing a musical instrument by causing involuntary muscular contractions that can be painful at their peak. The condition is sometimes “task-specific,” meaning that it is generally only apparent during certain activities. The loss of precise muscle control and continuous unintentional movement results in painful cramping and abnormal positioning that makes continued use of the affected body parts impossible.

Comprehensive dystonia rating scales exist and are used to “measure” the patient’s severity of muscle cramping. The medical treatment of dystonias consists of medications that target the brain (neurotransmitters) chemicals that affect muscle movement. Traditionally options have included injections of botulinum toxin if the area involved is small enough, carbidopa/levodopa (a medication used in Parkinson’s Disease), trihexyphenidyl, benztropine, tetrabenazine, deutetrabenazine, diazepam, and clonazepam. When these medications don’t work, DBS is an excellent alternative.

In the earlier part of this century, DBS became available for the treatment of many dystonias. The exact way DBS works is debated. Electrodes are surgically implanted into a specific part of the brain and connected to a generator in the chest of the patient, much like a cardiac pacemaker. This generator sends electrical signals to the brain that help control muscle contractions and improve the dystonias and the patients’ quality of life. Often times patients no longer need many of the medications they were taking. Unlike other DBS procedures for different conditions, in dystonia, the effects in the operating room are not always immediate. They require extensive efforts in outpatient programming with a specialized neurologist. It may take many months after the procedure to see the results, but patients are often amazed at the improvements with each office visit. After the introduction in the USA of DBS in 1997, it is now a well-established procedure for many neurological conditions; among them dystonias.

Bruno V. Gallo, MD joined First Choice Neurology and Baptist Hospital after 11 years in academic medicine. Dr. Gallo developed a keen interest in movement disorders at the National Parkinson Foundation while chief resident in his training. While in private practice he acquired expertise in deep brain stimulation (DBS) and was among the early pioneers of this therapy along with other movement disorders (Parkinson disease, essential tremors, and dystonia). He is currently Director of the Parkinson and Neuromodulation Center at Baptist Hospital. He also performs the pre-operative evaluation, intra-operative recording and testing, and post-operative programming of deep brain stimulation (DBS) patients, vagal nerve stimulation (VNS), and the newly approved Duopa Intestinal Gel therapy.

He completed novel innovative benchwork on anticonvulsant agents and is or has been a principal investigator/co-investigator on over 47 different Phase I and Phase II clinical research trials. He has written or co-written book chapters on Parkinson’s Disease, Epilepsy Surgery for the Elderly; HIV & Progressive Multifocal Leukoencephalopathy & Deep Brain Stimulation as well as numerous abstracts and manuscripts for publications in Neurology, Muscle & Nerve, Epilepsia, NEJM and Epilepsy Research.