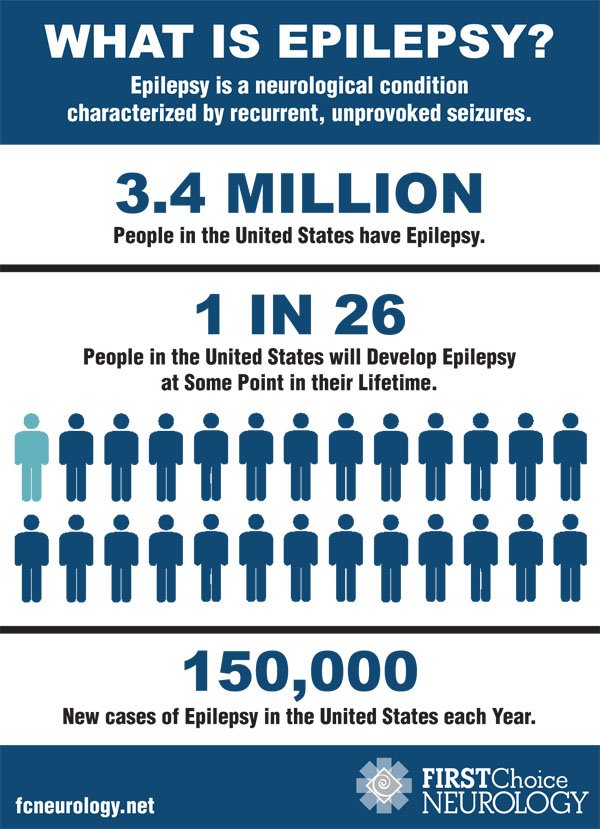 Epilepsy has been common throughout history. Somewhere around 3.4 million Americans suffer from epilepsy. In years past the general population held on to a belief that convulsions and seizures were a condition of the young. This is no longer a valid statement. The incidence of epilepsy (ie, the number of new cases per unit of the population) increases with advancing age. The incidence of epilepsy in people over the age of 60 exceeds that of children. Findings from a population-based study from England and Wales have revealed that this population (aged 65-80) is at a much higher risk of developing epilepsy. This, we believe is due to the fact that these patients carry a higher risk of seizures and epilepsy because of the increased risk of medical diseases that predispose patients towards developing seizures. Acute symptomatic seizures (those caused by an underlying disease like strokes, tumors, head injuries or infections of the brain) are approached differently than unprovoked seizures.

What Kind of Doctor Treats Seizures?

Most neurologists have received training and are well versed in the treatment of seizures and epilepsy patients.

Neurologists that have extra training in dealing with seizures are known as “epileptologists”. They complete additional training (approximately one to two years of a fellowship program) at the end of their residencies to learn more about seizures, epilepsy and the tests used to diagnose patients. And how to treat patients with all the new therapies now available.

The treatment of seizures are a complex task. Many new medications have become available to treat epilepsy. Depending on the type of epilepsy and the seizures you suffer your epileptologist will select the most appropriate medication for you. Sometimes the levels of these medicines are measured in your blood. Regular check-ups are a must.

In certain cases, an option for the treatment of seizures is “epilepsy surgery” where the abnormal focus creating the discharge that produces the seizures is removed from the brain if possible. The decision to have brain surgery is not an easy one to make and requires extensive testing. Ask your epileptologist. Many patients are not candidates because the removal of some parts of our brains is not possible without leaving the patient with a significant & unacceptable deficit.

Finally, there are some devices approved by the Food and Drug Administration (FDA) for the treatment of epilepsy. Some patients may have read about the Neurocybernetic Prosthesis (NCP)® system for Vagus Nerve Stimulation Therapy and Responsive neurostimulation (RNS). Ask your epileptologist about this particular treatment modality.

Support systems to help patients with epilepsy are available. Many mechanisms like safety issues, transportation problems, memory tricks, and national support groups are available. Local chapters are present in practically every state.

Our brains conduct small currents of electricity between cells. When these electrical discharges are made abnormally you develop a seizure. If you develop 2 or more seizures in your lifetime that are unprovoked, your doctor will diagnose you with epilepsy.

During a seizure, the electrical impulses are “in-sync” compared to the normal conduction. And depending on what area of the brain is affected this will produce different clinical manifestations. Patients will complain of losing consciousness, falling, biting their tongues, losing bladder or bowel control and in some cases may even jerk all four limbs (arms and legs). Some milder forms of seizures may only make the patient appear “lost” for a short period of time, then regain consciousness and composure without injury. This brief disturbance of consciousness can be accompanied by what seems like repetitive non-sense movements of the hands, arms or legs.

Seizures are caused by many different problems including liver and kidney failure, stroke, brain tumors, infections in the brain (meningitis & encephalitis) alcohol, drugs, and in children even very high fevers. Head injuries and low blood sugar may also be responsible.

Epilepsy is very complex and the cause of seizures, for many people, is never known. There is evidence that a genetic component exists but is not common. In as many as 65-70% of cases the specific cause if never identified. When not identified it is called idiopathic epilepsy.

The diagnosis of epilepsy is arrived by your neurologist or epileptologist. A history review and complete neurologic examination followed by special tests of your brain are also ordered, including electroencephalograms (EEG), computerized axial tomography (CT scan) and special magnetic resonance imaging (MRI) on more powerful magnets with special sequences for seizure patients. These tests may help in making the diagnosis and in classifying your seizures so the right medicine is chosen.

There are many different types of seizures and your doctor will help you in classifying the type of epilepsy you suffer from. The most important thing is to obtain a good history from someone who can describe in great detail a “typical attack”. It is important for your doctor to distinguish which kind of epilepsy you are suffering from because it allows him/her to choose the most appropriate medication.

Dr. Gallo is a Neurology Attending and Consultant at Baptist Hospital, South Miami Hospital, Jackson Memorial Hospital, and Jackson South.  He is the recipient of the Peritz Scheinberg Clinical Neurology Award and completed the Bowman-Gray Mini-Epilepsy Fellowship under the direction of J. Kiffin Penry, M.D.

He completed novel innovative benchwork on anticonvulsant agents and is or has been a principal investigator/co-investigator on over 47 different Phase I and Phase II clinical research trials.  He has written or co-written book chapters on Parkinson Disease, Epilepsy Surgery for the Elderly; HIV & Progressive Multifocal Leukoencephalopathy & Deep Brain Stimulation as well as numerous abstracts and manuscripts for publications in Neurology, Muscle & Nerve, Epilepsia, NEJM and Epilepsy Research.