Reposted from Neurology Advisor – written by Jeffrey A. Allen, M.D. 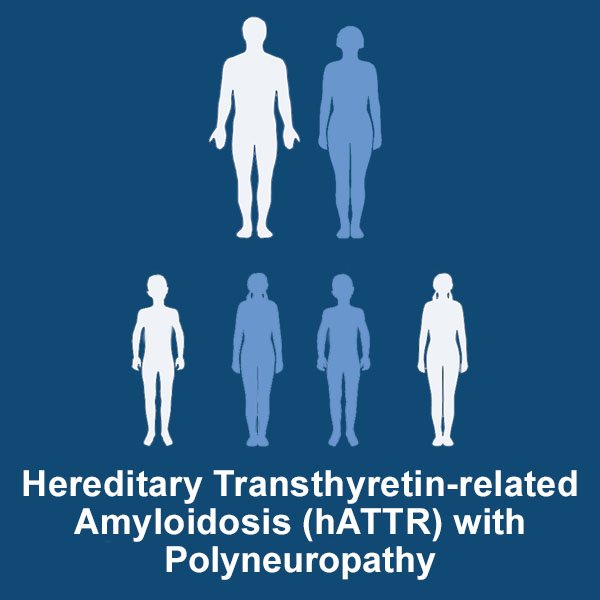 Hereditary transthyretin-related amyloidosis (hATTR) with polyneuropathy is a rare, progressive, fatal disease that has been challenging for neurologists to diagnose and manage, until now.

This disease, which often presents first with polyneuropathy, is caused by misfolding of the transthyretin (TTR) proteins produced in the liver due to inherited autosomal dominant mutations. For decades, the only treatment option available was liver transplantation. The recent approval and availability of new treatments specifically designed to prevent the formation of the TTR proteins, combined with the data generated by subsequent clinical trial programs, has created a new paradigm that establishes an urgency and reason to diagnose this progressive disease and appropriately treat patients who may benefit from newly available therapies. Neurologists are in a unique position: we have the rare opportunity to intervene early in a patient’s journey, to not just diagnose but change the course of a genetically determined disease.

Characterized by the extracellular deposition of misfolded TTR protein,1,2 hATTR amyloidosis with polyneuropathy can affect multiple organs and body systems — such as the heart, nervous system, gastrointestinal tract, and kidneys — and lead to progressive organ dysfunction. Initial presentation of hATTR amyloidosis with polyneuropathy is typically peripheral and autonomic polyneuropathy.2,3,4 Although the rate of disease progression is variable, we know that once a patient is symptomatic, the neuropathy will progress, often rapidly, to devastating disability.

The cluster of seemingly unrelated symptoms that patients often present with makes hATTR amyloidosis particularly challenging to diagnose.3,4,5 As a result, the typical patient journey is long, winding, and frustrating, requiring multiple visits to several specialists. This often leads to delays in diagnosis; in 30% of patients, the time from neuropathic symptom onset to hATTR amyloidosis diagnosis is 3 years or more6.

Delays in diagnosis, and ultimately, access to treatment can have devastating consequences for patients. Disability begins early in the disease course, and with progression comes a relentless accumulation of disability affecting a patient’s ability to perform activities of daily living and engage in social and employment-related events. Left untreated, hATTR amyloidosis with polyneuropathy will lead to death, most commonly due to cardiomyopathy, cachexia, or infections such as sepsis or bedsores from impaired mobility.

Prior to 2018, treatment was largely palliative, focused on controlling end-organ damage or high-risk liver transplantation. It’s no wonder neurologists and other specialists have not prioritized diagnosing this disease — the lack of proven, targeted treatments rendered those efforts essentially futile.

Historically, amyloidosis was diagnosed by nerve biopsy. Advances in genetic testing have yielded the development of a new generation of more efficient screenings that make early, accurate, and rapid diagnosis accessible through confidential, no-cost programs. The known accuracy of these tests removes the need, in many cases, for traditional nerve biopsy, which is known to lack sensitivity. The availability of these tests makes it possible for individuals at risk for hATTR amyloidosis with polyneuropathy to be tested when they present with neuropathies that cannot otherwise be explained.

Once diagnosed, gene silencing drugs are now approved by the US Food and Drug Administration to reduce the production of TTR protein in the body, thereby addressing the root cause of hATTR amyloidosis with polyneuropathy. Data show that the earlier the disease is treated, the better the outcome.

These treatments have ushered in a new era of possibility for neurologists to help shift hATTR amyloidosis with polyneuropathy from a progressive and fatal disease to a chronic disease. We now have the potential to transform the lives of patients who may have struggled for years with unexplained symptoms, and families that may have experienced the impact of this debilitating condition for generations. The tools are at our disposal.

Patients that carry a diagnosis of CIDP but who have red flag symptoms, fail to meet CIDP electrodiagnostic standards, and are refractory to first-line CIDP immunotherapies are especially attractive candidates for hATTR screening. When polyneuropathy from hATTR amyloidosis develops, earlier treatment portends a more favorable prognosis as prevention of TTR protein production slows disease progression. With these new therapeutic tools in our armamentarium, early and accurate diagnosis of hATTR amyloidosis with polyneuropathy has never been more important.