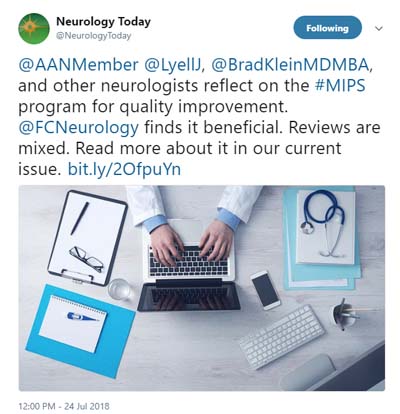 Not all neurologists are fans of the MIPS program. But First Choice Neurology has found it beneficial discusses its strategies for success with the program.

The federal government’s Merit-based Incentive Payment System (MIPS) has many detractors but the folks at First Choice Neurology, a large practice in South Florida, are not among them.

In MIPS’ first year, the practice expects to score the maximum number of points, with bonus points to spare, in all three categories — quality, improvement activities, and use of electronic health record (EHR) technology.

The Centers for Medicare & Medicaid Services (CMS) will announce the final results later this month. But, based on the points accrued, Jose Rocha, First Choice Neurology central business office director, is confident the physicians will receive a 4 percent positive payment adjustment to its Medicare Part B billings in 2019, reflecting their MIPS scores in 2017. And he hopes — though he is still not certain — they will have earned “exceptional performer” status: another 10 percent of Medicare Part B billings.

“We had bonus points to throw away because it caps you at a certain level,” Rocha said. “I can’t imagine we would not.”

Figuring out the logistics of the MIPS program was Rocha’s job, but the practice’s physicians are the key to First Choice’s success, he said.

“This is a physician-owned practice, so the physicians decide what administration pays attention to and what’s important to them,” he said. “The doctors are the ones who became engaged.”
First Choice Neurology — with 88 providers, including 66 neurologists, practicing in nearly 40 offices — participated in the government’s previous incentive programs with little enthusiasm and mixed success, Rocha said.

About three years ago, the software that provided the patient-education information needed to meet the government’s Meaningful Use program requirements stopped working, prompting complaints from physicians who wanted their patients to have the information.

“I remember looking at the doctors and saying, ‘I thought all we did this for was to get that bonus,’” he said. “This wasn’t about checking a box anymore because the information had become useful.”

That proved to be a turning point in engagement for most, although not all, the First Choice physicians. When the MIPS program was announced, the practice’s executive board created a committee to determine how it would participate. They decided to submit data via electronic health record, submit for the entire year rather than a shorter period, and solicit input from all subspecialties to identify the measures that would be targeted.

Ultimately, they reported on nearly double the number of quality measures needed; CMS used the measures with the highest scores.

“We were only required to do six, but we tracked 11,” Rocha said. “For example, we have movement disorder specialists who wanted to track the fall measures. We weren’t going to tell them no, so we tracked that.”

For example, because First Choice Neurology providers direct stroke programs at nearly 20 hospitals, practice leaders wanted to track a measure related to stroke prevention. They chose “percentage of patients with a diagnosis of hypertension whose blood pressure is adequately controlled.”