May is National Stroke Awareness Month and American Stroke Month. Every 40 seconds someone in the United States has a stroke, according to the American Heart Association. Stroke is the 5th leading cause of death, but you can control several risk factors for stroke. It is important to know that stroke is 80% preventable.

Are you at Risk for a Stroke? 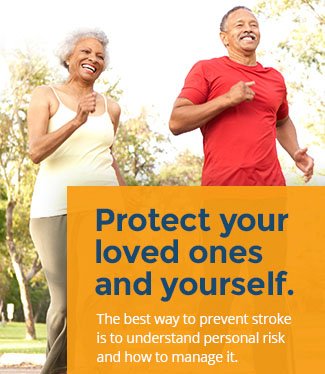 Smoking can greatly increase the risk of stroke. Nicotine and carbon monoxide damage the cardiovascular system and pave the way for a stroke. The risk of stroke more than doubles for African Americans who smoke, according to a new study.

Diabetes is a risk factor for stroke, and you should control your blood sugar. Many people with diabetes also have high blood pressure, high cholesterol, and are overweight which puts them at a higher risk for stroke.

Avoid high saturated fat diets. Trans fat and cholesterol can raise blood cholesterol levels. Large amounts of cholesterol in the blood can build up and cause blood clots — leading to a stroke. A diet containing five or more servings of fruits and vegetables per day may reduce the risk of stroke.

Being overweight or obese increases your risk for stroke. Nearly 25% of adults have metabolic syndrome, a set of factors that in combination amplify a person’s risk of heart disease, diabetes, stroke, and other illnesses.

Physical Activity can help you stay at a healthy weight and lower your cholesterol and blood pressure levels. Two-and-a-half hours of moderate-intensity aerobic physical activity, like a brisk walk, is suggested each week.

Make sure to get enough sleep every night. Adults need 7-9 hours per night.

If you have Atrial Fibrillation (AFib – Irregular heartbeat), get treatment to keep your stroke risks low. AFib patients are at a 5x greater risk for stroke. Sleep apnea can be linked to AFib and is associated with increased stroke risks.

People with Peripheral Artery Disease (PAD) have a higher risk of carotid artery disease, which raises their risk of stroke. The carotid arteries in your neck supply blood to your brain.

Children with Sickle Cell Disease (SCD) are at higher risk for stroke. Children between the ages of 2 and 16 should be screened annually with transcranial doppler ultrasound. Children who are at high risk for stroke who receive regular blood transfusions can reduce their stroke risk by more than 90%.

What is a Stroke?

A stroke is when blood flow to a part of the brain is blocked or when a blood vessel in the brain bursts. Blood carries oxygen to cells in the body. When brain cells are starved of blood, they die.

Ischemic Stroke (Clots) – An ischemic stroke occurs when a vessel supplying blood to the brain is obstructed or clots. It accounts for about 87% of all strokes. Fatty deposits lining the vessel walls, called atherosclerosis, are the main cause of an ischemic stroke.

TIA (Transient Ischemic Attack) – A TIA is a temporary blockage of blood flow to the brain. It is sometimes called a mini-stroke. It is caused by a serious temporary clot. It doesn’t cause permanent damage and is often ignored. TIAs may signal a full-blown stroke ahead.

Cryptogenic Stroke (Unknown Cause) – Strokes without a known cause are called cryptogenic. About 1 in 3 ischemic strokes are cryptogenic. Some studies suggest that cryptogenic stroke is higher in African- Americans (two times more likely) and Hispanics (46% more likely).

Brain Stem Strokes (Complex Symptoms) – The symptoms of vertigo dizziness or imbalance usually occur together; dizziness alone is not a sign of stroke. A brain stem stroke can also cause double vision, slurred speech, and decreased consciousness.

Talk to Your Neurologist

About one in four stroke survivors is at risk for another stroke. Luckily, up to 80 percent of second clot-related strokes may be preventable. Make a plan with your doctor to stop another. This may include managing high blood pressure and aspirin or other medicine. Aspirin isn’t right for all people. Talk to your doctor first.