Today is World Alzheimer’s Day. It’s a day to celebrate to create awareness about the disease and to reduce the stigmatization and lack of information surrounding dementia. 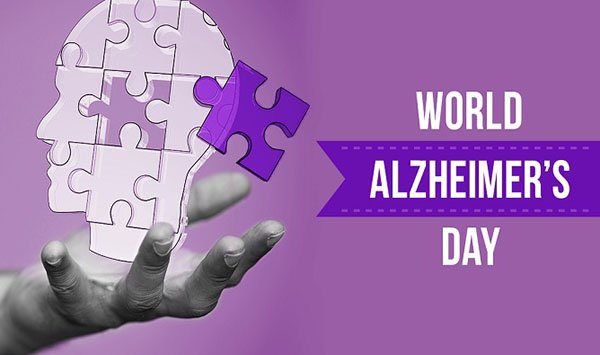 Most people often think Alzheimer’s disease is a normal part of aging. A majority of Alzheimer’s patients are 65 years or older, but it doesn’t classify the disease as an elderly disease. There are many people under 65 who are suffering from Alzheimer’s. This is known as young-onset dementia.

There has been a lot of talk about Alzheimer’s and Biogen’s new drug Aduhelm that was FDA approved on June 7, 2021. In fact, Biogen is providing Aduhelm free to some patients because of slow reviews by Medicare. The accelerated FDA approval was granted based on data from clinical trials. The trials showed Aduhelm reducing amyloid-beta plaques in patients.

In March, Eli Lilly reported that their clinical trial of the experimental drug donanemab appears to have successfully slowed cognitive decline in patients with the early symptoms of Alzheimer’s.

Alzheimer’s disease is the most common cause of dementia. It destroys brain cells and nerves disrupting the transmitters which carry messages in the brain, particularly those responsible for storing memories.

Alzheimer’s is a degenerative brain disease. It is a type of dementia that causes problems with memory loss and cognitive abilities. Researchers believe that Alzheimer’s disease begins 20 years or more before you notice symptoms. Symptoms occur because nerve cells (neurons) in parts of the brain have been damaged or destroyed. Symptoms usually develop slowly and worsen over time, interfering with an individual’s ability to perform everyday activities.

In the early stages, memory loss is mild, and the individual is said to have dementia due to Alzheimer’s disease, or Alzheimer’s dementia. In the late stages of Alzheimer’s, neurons in parts of the brain that enable a person to carry out basic bodily functions are affected. Individuals lose the ability to carry on a conversation, walk, or swallow. The cause may include a combination of genetic, environmental, and lifestyle factors.

Dementia is a term for a collection of symptoms that are caused by disorders affecting the brain and impact memory, behavior, and emotion. The most common is Alzheimer’s disease, which affects 50-60% of people with dementia. Other types of dementia include Lewy body dementia, vascular dementia, and frontotemporal dementia.

Our brains are made up of over 86 billion nerve cells – more than the stars in the Milky Way. Dementia damages nerve cells so they are no longer able to communicate effectively and this impacts how our body functions.

Symptoms of a person living with dementia will depend upon what part of the brain is affected and/or the specific disease that is causing their dementia.

What is a Memory Café?

According to the Alzheimer’s Association, “Memory Cafés are a comfortable, social gathering that allows people experiencing memory loss and a loved one to connect, socialize, and build new support networks. Cafés are currently meeting via Zoom, so grab your computer, tablet, or smartphone and join us for a variety of activities including music, crafts, and more.”

First Choice Neurology created a Memory Café that offers educational materials, videos, a list of support groups and Neurologists, a virtual library, clinical trials, and other resources for Alzheimer’s and dementia. Our Memory Cafe is a virtual community for those living with Alzheimer’s disease and dementia, caregivers, and family members.

Let’s all create awareness on World Alzheimer’s Day. Talked to your loved ones about dementia and Alzheimer’s. If you need an Alzheimer’s specialist, contact one of our Neurologists today!